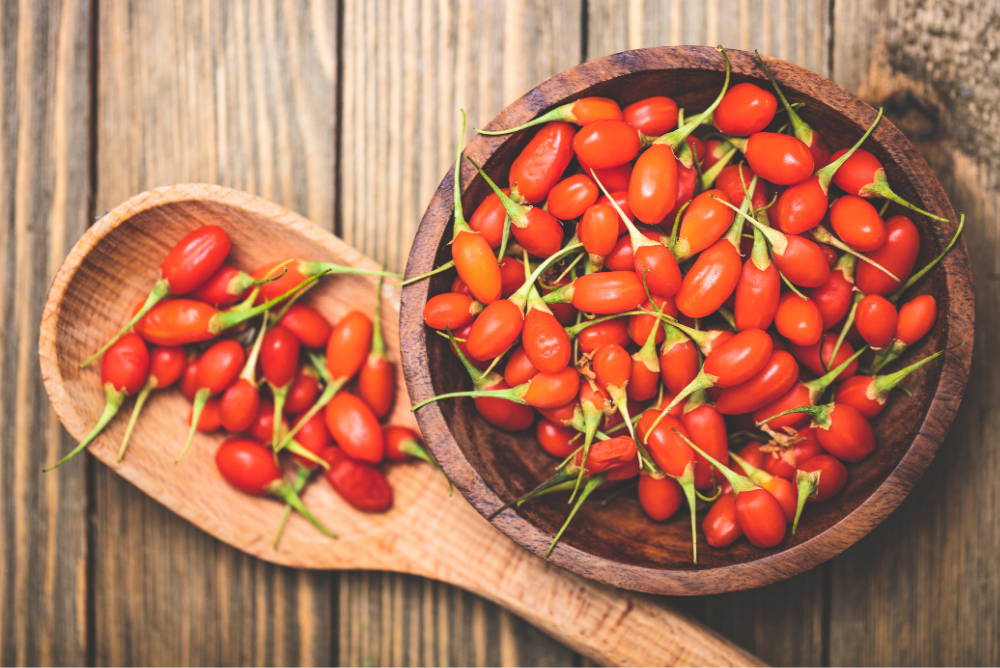 The goji berry (Lycium Barbarum); also known as wolfberries, has many health benefits ranging from a decrease in the risk of developing age-related macular degeneration to improving athletic performance and a sense of overall wellbeing. Read on to learn the many benefits of the goji berry.

What Are Goji Berries?

The red, sweet, tangy fruit of an evergreen found in China, Mongolia, and Tibet, the goji berry, like many berries, is exceptionally rich in antioxidants and carotenoids that can protect the eyes from degenerative diseases. Also, providing an ample dose of amino acids, vitamin C, vitamin E, fatty acids, and B vitamins. Goji berries are a well-rounded superfood. They have been used in Asia for more than 2,000 years as a traditional medicinal herb and food supplement.

What makes goji berries so nutritious?

Goji berries are considered a fruit and an herb. They contain 18 amino acids, 21 trace minerals, high levels of vitamin C, beta-carotene, vitamins B1, B2, and B6, polysaccharides, 21 trace minerals such as iron, zinc, copper, phosphorous, selenium, manganese, and magnesium.

Due to their high amounts of beta-carotene, consuming goji berries can also promote healthy, glowing skin. They can protect the eyes and boost the immune system, and the juice has been found to improve energy and gastrointestinal function. Goji berries are a well-rounded superfood with a tangy, sweet flavor.

Goji Berry is known to be rich in antioxidants that help protect against free radicals and oxidative stress stabilization. 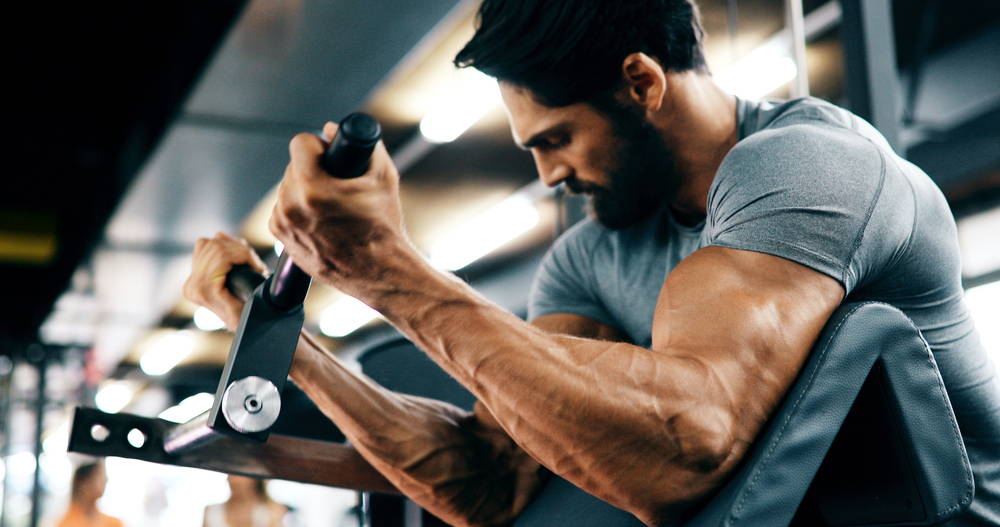 Known as a “longevity food,” goji berries contain protein, vitamins, and minerals. Goji berry is a unique fruit in that it has all 9 essential amino acids. They increase energy, endurance, and vitality. They enhance stamina and strength and assist in recovery from intense workouts and promote cardiovascular health. Before your next workout grab a handful of goji berries for an energy boost.

In one study, oxidative stress, inflammation, and muscle fatigue were diminished when subjects were given 400mg of goji berries.

Goji berry fruit juice has been reported in several randomized clinical studies to significantly increase energy expenditure after eating and has been observed to be effective in controlling waist circumference. Hence, may reduce the risks of metabolic syndrome.

The nutrients in goji berry juice powder such as vitamin B1 and calcium promote a quicker burning of carbohydrates that helps with weight loss. Goji berry juice has a sweet taste but is low on the glycemic index. They may also help reduce cravings for sugary, starchy foods that can add to weight gain.

Like most berries, goji berries have high levels of antioxidants like vitamin A and vitamin C. These key nutrients are essential in helping build a healthy immune system by fighting harmful free radicals and inflammation. They can help protect from infection, and also help speed up wound healing that will help you recover from infections or wounds faster.

Further studies have shown that goji berries have a wide variety of immunomodulatory functions, including activation of various immune cells. In one study, test subjects who supplemented with goji berry juice fought against the flu more effectively than those who were given a flu vaccine. 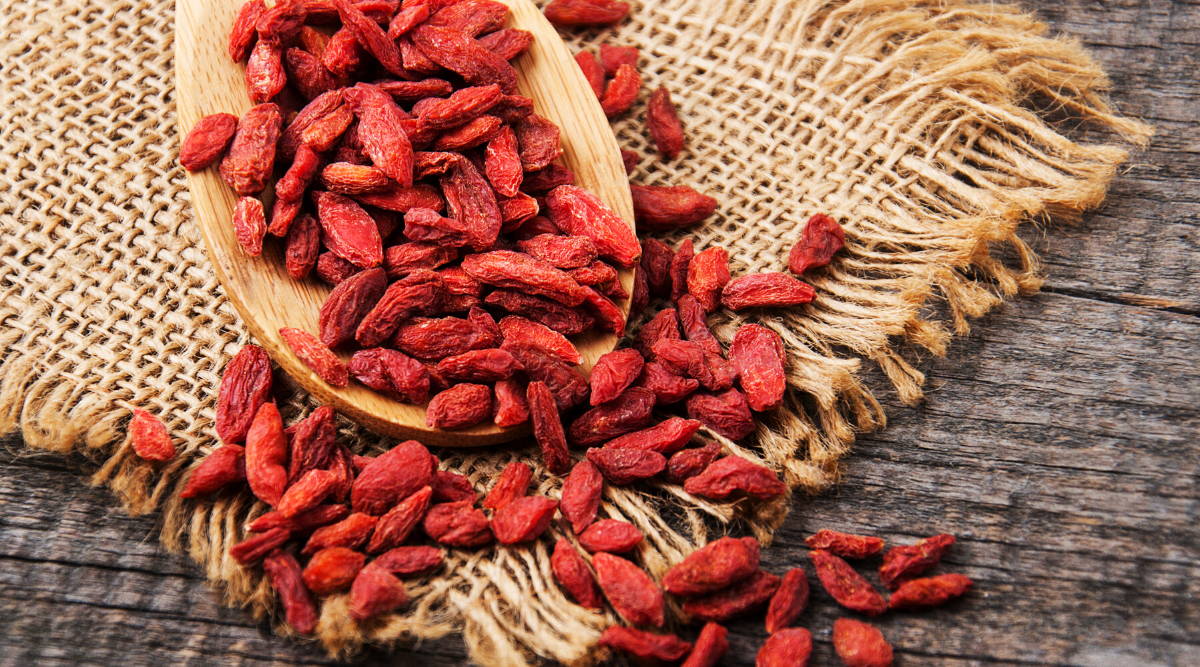 Goji berries are rich in antioxidant phytochemicals, including carotenoids, beta-carotene, and zeaxanthin. The carotenoids present in goji berries are responsible for the characteristic orange-red color of the berries. Goji Berries provide 26.822 IU of Vitamin A and 48.4 mg of vitamin C per 100 grams. This superfood is also high in minerals such as copper, selenium, iron, potassium, zinc, as well as vitamin B2 and thiamine.

These antioxidants help protect cells from oxidative damage caused by free radicals. Free radicals are unstable molecules that can damage the cells in your body. When free radicals oxidize, they damage the DNA and tissue cells, opening the way for many diseases.

Oxidative DNA damage and mutations accumulate with age, which can cause cancer, aging, and various other systemic diseases. Early wrinkle formation is one of the features of free radical damage to the skin.

Goji Berries are one of the highest sources of antioxidants and have been used to improve eyesight or age-related macular degeneration. These superfood berries are also packed with antioxidants like zeaxanthin, which help protect your lenses and retinas against damage

Wolfberries are the richest plant source of zeaxanthin, an important dietary carotenoid antioxidant that greatly benefits the eyes. Human supplementation trials have shown that daily intake of wolfberries increased plasma levels of zeaxanthin.

In addition to zeaxanthin, wolfberries are an excellent source of selenium and vitamin C both of which increase the levels of your body's master antioxidant Glutathione.

Related: The Most Powerful Antioxidant Glutathione

Many researchers believe that zeaxanthin and lutein, two phytochemicals naturally occurring in the Goji berry, are potent protectors against macular degeneration and may slow down the aging of the lens and prevent the formation of cataracts. 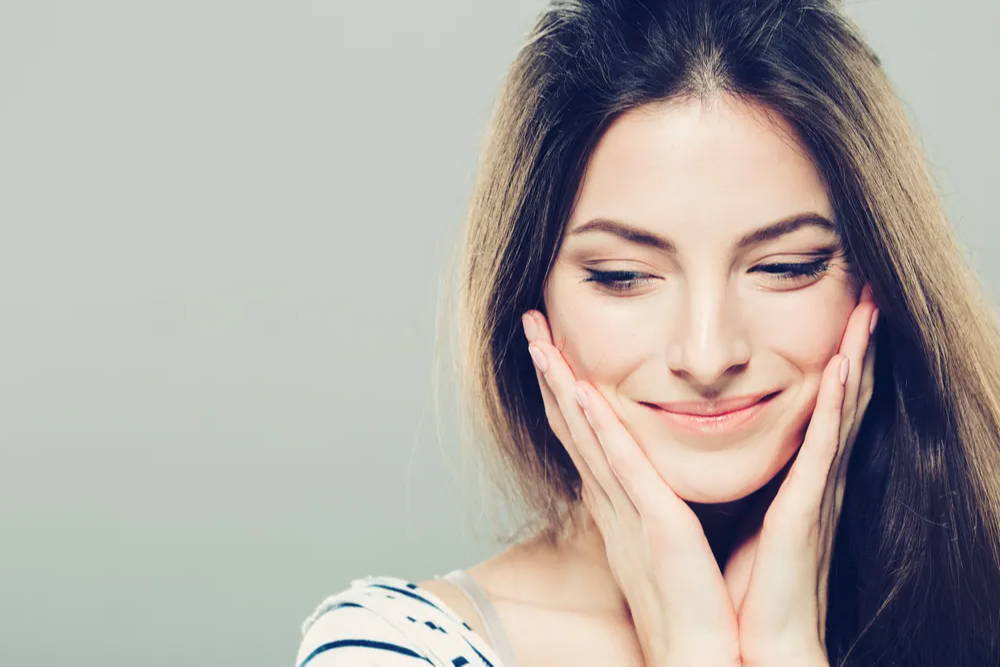 Goji berries are a rich source of beta-carotene, which is turned into retinol in the body. Beta-carotene helps to protect and repair the skin, maintaining skin health and may protect the skin against UV radiation from the sun.

Goji berries also contain betaine, a natural amino acid that has shown to have preventive effects on ultraviolet B (UVB) skin damage.

“UVB is a common kind of free radical that can cause extrinsic aging, such as skin aging. Betaine has been proved to reduce photodamage caused by UVB irradiation. Betaine can be used to suppress the formation of UVB-induced wrinkle and collagen damage by inhibiting the extracellular signal-regulated kinase (ERK), protein kinase (MEK), and matrix metalloproteinase 9 (MMP-9)”

Goji berries have been used in traditional medicine to help lower blood sugar and thus manage symptoms of diabetes.

The Goji berry supplements helped control the release of sugar into the bloodstream. It prevented spikes and dips due to problems balancing glucose levels. Evidence shows that gojis exhibit significant hypoglycemic effects and insulin-sensitizing activity by increasing glucose responsiveness. According to this study, goji berries may be a natural diabetes remedy as a way to increase insulin sensitivity. Therefore, goji berries might be one of the best choices for those with trouble balancing blood glucose levels and their effects.

The study also showed improved sleep quality in those that consumed the goji berry juice, and none experienced negative effects related to drinking the juice.

Betaine, a phytonutrient found in abundance in goji berries, has been linked to a variety of functions in the body, including calming nervousness, enhancing memory, and promoting muscle growth.

Related: 21 Ways to Boost Your Mood and Elevate Well-Being 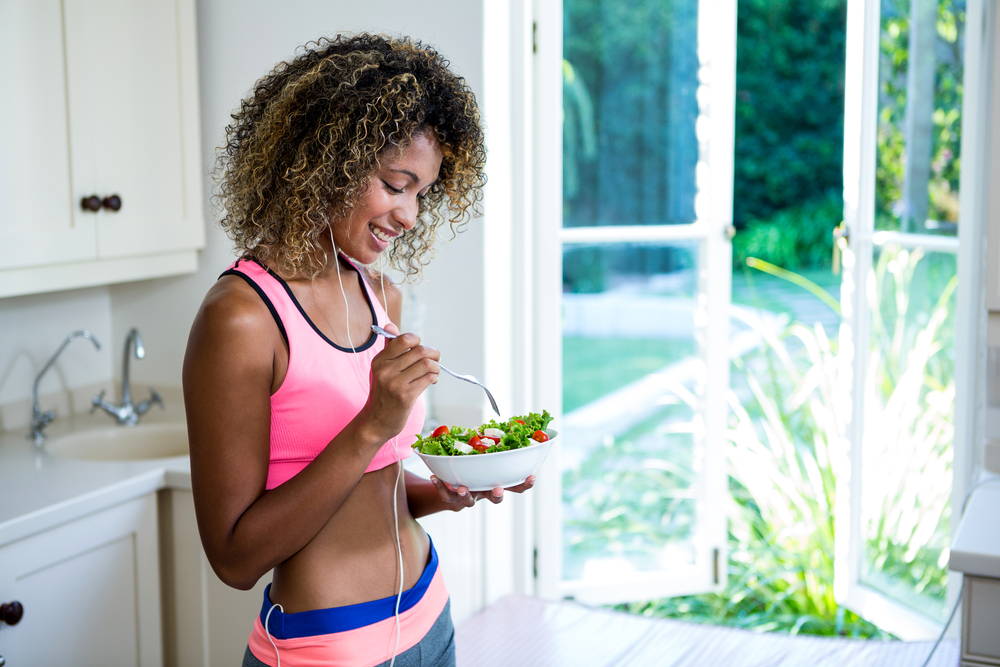 Goji berries have been used to treat liver disease in traditional Chinese medicine. The Goji Berry has a high amount of the antioxidant Lycium Barbarum, which has been used in Chinese medicine to benefit liver and kidney disease as well as reduce abdominal fat and improve the lipid profile.

Thanks to their high antioxidant content, consuming goji berries could help to protect your liver from the oxidative stress that occurs from consuming a high-fat diet.

Related: Eat These 15 Clean Foods For A Good Liver Detox

Why Goji Berries are a superfood

Goji berries are packed with powerful antioxidants, protein, vitamins, and minerals. They help increase energy, endurance, and vitality. They en­hance stamina and strength, assist in recovery from intense workouts, and promote cardio­vascular and digestive health.

A 15-day experiment evaluated the general effects of consuming goji berries. Following the study, there was a significant increase in energy, focus, sleep quality, and a general feeling of well-being, neurological characteristics, and overall body system complaints.

The researchers concluded that daily consumption of goji berries may improve overall well-being, and improve psychological performance and gastrointestinal functions. 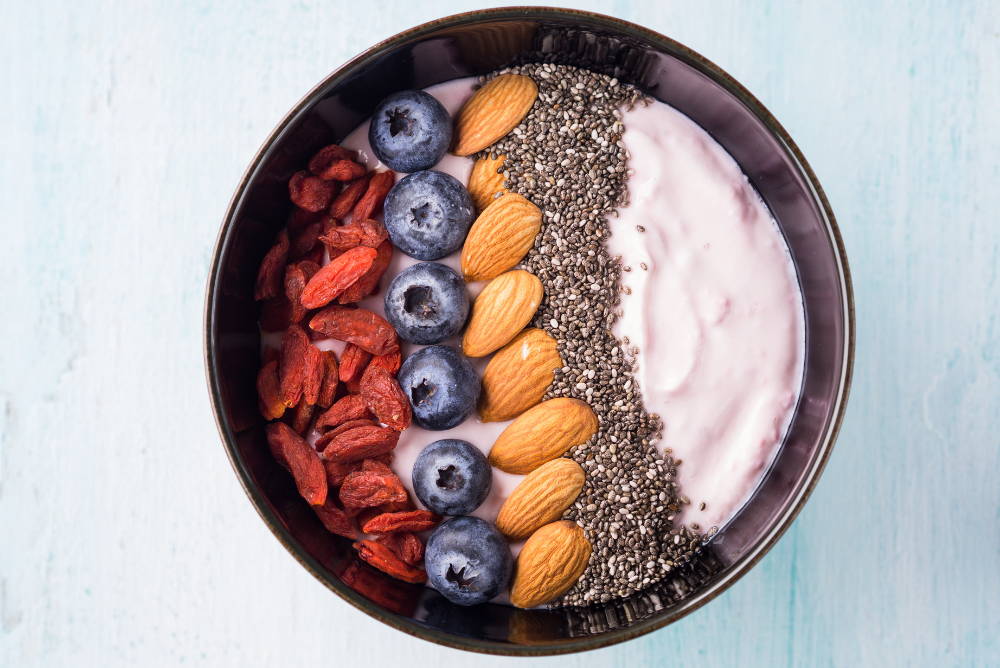 Known to be rich in antioxidants that help protect against free radicals and oxidative stress stabilization. Mix it in your smoothies, stir it into your tea, top your yogurt or cereal, and add some zip to your salsas and zing to your desserts.

The benefits of Vitamin A, Riboflavin, Selenium, and copper make Goji Berry Juice Powder the perfect healthy addition to any recipe. 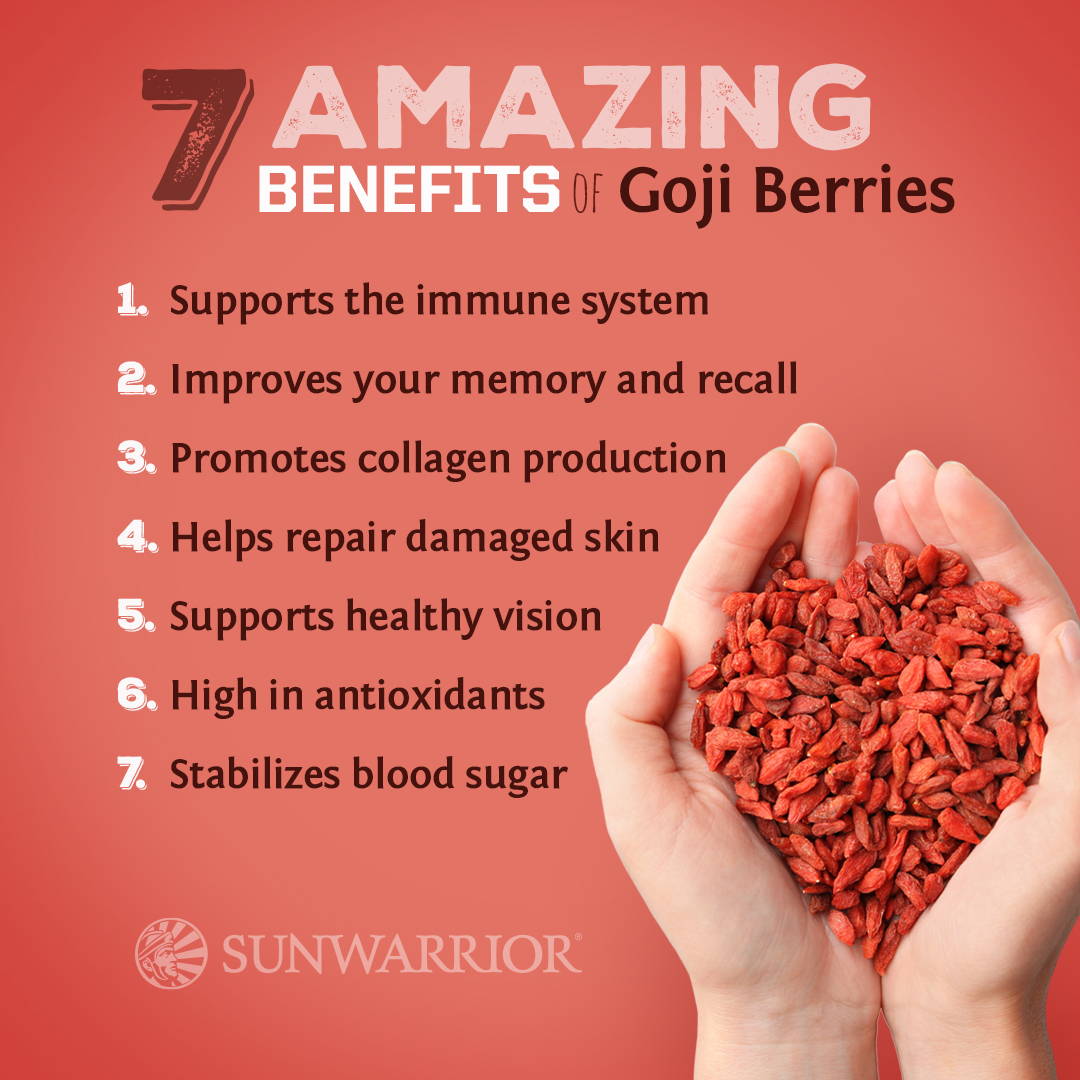